Will & Heather Cabe know farming poultry, cattle and hay is a successful formula because they both grew up on this type of farm. Now the Cabes are using the knowledge and work ethic they learned as farm kids to farm in partnership with Will’s parents, Chan and Lou.

Will, who is the fourth generation of his family to farm, is responsible for the bulk of the farm’s management/decision making, and he’s working to expand the farm to ensure future generations can continue the family tradition.

“The cows are my number one passion, but the diversity of the farm is what has allowed us to stay in business as long as we have,” Will said. “We have lived through some adverse cattle markets, and if not for poultry, we may have been run out of business.”

The Cabes grow broilers for Fieldale.

Will, who showed registered Angus growing up, began farming in 2002, at 17, building a small herd from his show cows and a herd of goats. He graduated from UGA with an ag education degree in 2008 but opted to farm full time.

Will used his show cows to transition the farm’s small commercial cow-calf herd into a seedstock herd of registered Angus and Simangus cattle to produce herd sires and show heifers. He acquired registered cows with the genetics he wanted and bred them to quality bulls with a focus on economically important traits.

Six years ago, when the Cabes’ first son was born, Will decided to transition the herd back into a commercial cow-calf operation because of the time required to manage donor and recipient cows in a seedstock herd. Their current herd is about 225 head of quality Angus/Simangus. 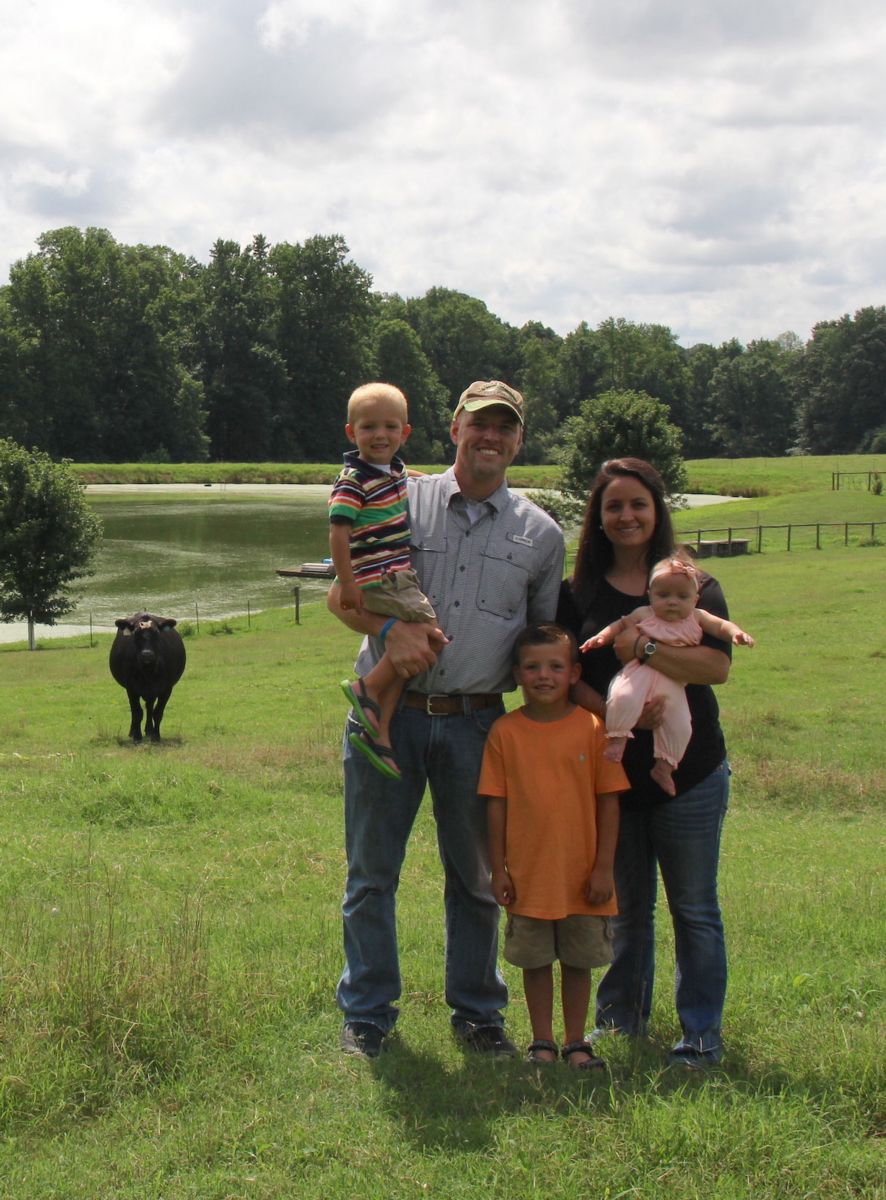 Heather, who grew up in Madison County, plays an active role on the farm, walking the farm’s broiler houses every morning to check on the birds and make sure the feeders and water lines are operating correctly. She also rakes and fluffs hay and drives hay wagons as needed.

“I like the fact that I can be here. I don’t have to clock in and out somewhere,” Heather says. “If there’s anything I need to help out with I can do it with my kids in tow.”

The Cabe family began their goat herd to produce meat. As market goat shows grew in popularity, the Cabes transitioned into raising show goats. From 2007 until last year, the Cabes held a sale on their farm to sell their goats, but they are now selling the goats through private treaty or online.

Will expanded the farm’s hay crop from only harvesting dry hay to wrapping wet hay to have a higher quality forage to feed the cattle during peak production times. He offers custom hay harvesting and wrapping services to other farmers as time allows.

“My goal is to have forty to sixty percent moisture with the wet hay. I’m usually on the high end of that,” Will said. “We cut today and bale tomorrow.”

In addition to their daily farm chores, both of the Cabes have part-time ag-related jobs.

Will has been a livestock show judge since high school. He estimates he judged at least a dozen shows a year across the Southeast before cutting back on shows in the past year now that sons Deacon and Teller are old enough to show lambs and goats. Will showed sheep, cattle, hogs and goats for 18 years growing up and judged livestock on scholarship at Northeast Oklahoma A&M.

“This skill set [judging] has paid dividends through the years on our farm as it has been the basis for selecting herd replacements in both our goat and cattle herds,” Will said.

Heather has a graphic design business that specializes in creating t-shirts, flyers and mailers for livestock shows/sales and farm logos for apparel.

“Being a farmer, I bring a unique perspective to my graphic design business that allows me to depict agriculture in an accurate way and help other farmers market their farms and products,” Heather said.

When asked why it’s important for farmers to have an organization like Farm Bureau, Will answered, “Farm Bureau rallies the troops. You put a bunch of folks together and send us in an organized fashion to voice our issues to legislators. There are a lot of times I’ve thought ‘I’m in this battle alone,’ but Farm Bureau has taught me I’m not the only one.”

Being active in Farm Bureau has equipped Heather to be a better advocate for agriculture.

This year Heather began a three-year term on the GFB Women’s Leadership Committee representing the 14 counties in the GFB 2nd District.

“I felt like coming off the Young Farmer and Rancher Committee and having young children of my own I could offer a different perspective for Ag in the Classroom,” Heather said.

The Cabes are also active members of the Georgia Cattlemen’s Association for which Will serves as vice chairman of the Young Cattlemen’s Council. He also serves on the Farm Credit Advisory Board. The family attends Moriah Primitive Baptist Church.