It wasn’t an April Fool’s joke when the Johnsons posted a video on their Providence Dairy Facebook page showing milk gushing down the drain. The April 1 post was a jarring image of how COVID-19 impacted Georgia farmers. Over two weeks, the Johnson family dumped five tanks of milk - 240,000 lbs. 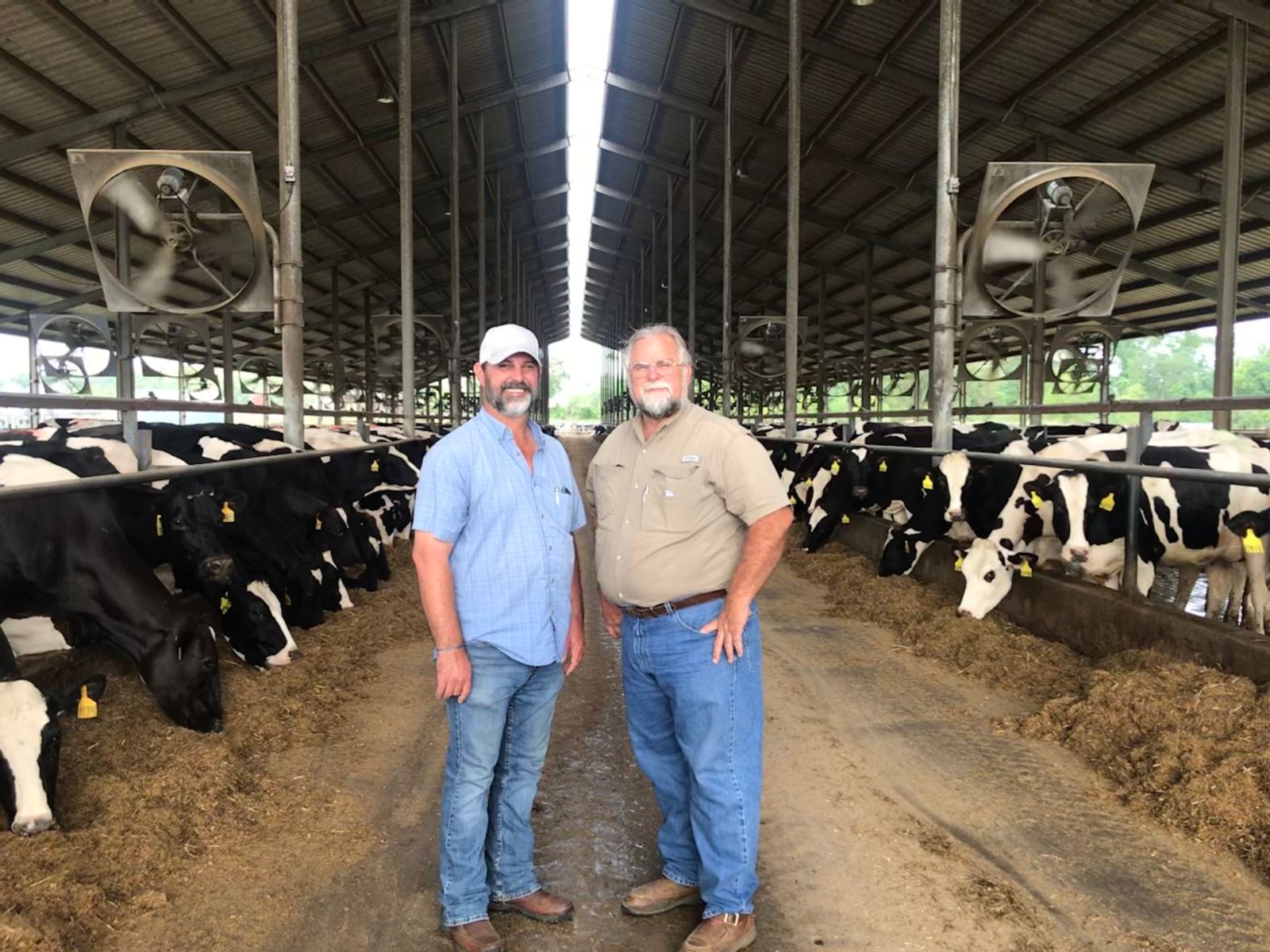 Matt and Laura Johnson farm in partnership with his dad, Paul, milking about 1,200 cows three times a day on their Decatur County farm.

The Johnsons are among about 50 Georgia dairies that belong to the farmer-owned Dairy Farmers of America Co-op (DFA) according to Jon Bebermeyer, DFA Southeast Area chief operating officer.

Matt, who serves as a council member for the DFA Southeast Area, wasn’t alone in being asked to dump his milk.

“I understand it’s a business decision that unfortunately has to be made,” Matt said April 2. “At the end of the day, I trust the people marketing my milk are making the best decisions they can.”

“It’s hard to watch. You work so hard 24 hours a day, seven days a week, 365 days a year to produce something that’s healthy. Then, you have to watch it go down the drain,” Matt said.

Many of Georgia’s 130 dairy producers belong to DFA, with about 65% of milk produced in Georgia going to DFA plants, said  Farrah Newberrry,  executive director of the Georgia Milk Producers (GMP). Georgia producers  were asked to dump 100 tanker loads of milk with a value of about $1million, Newberry said.

While they weren’t asked to dump milk, the 15 to 20 Georgia farmers producing for Southeast Milk Inc., were asked to cut their production and took an 18% pay cut for their milk during the time DFA producers were dumping milk, a member of Georgia’s dairy community, who requested anonymity, said.

Why was milk dumped?

“The first of March to mid-May is a period of time for Southeast dairies called ‘Spring Flush.’ During this time, dairy cows naturally produce more milk. The weather is good. Grass is growing fast,” Matt explained.

Bebermeyer said DFA relies on two ‘balancing’ plants to absorb Georgia’s Spring Flush milk. A plant in Union Town, Ala., makes cheese. A plant in Baconton, Ga., makes condensed dairy products used by restaurants and other foodservice customers. These plants were idle for about a month, until late April, Bebermeyer said, due to the sharp decline in foodservice business COVID-19 caused.

One-third of milk produced in the U.S. goes into the foodservice sector, such as restaurants and schools, said Rebecca Egsieker, The Dairy Alliance director of communications & farmer relations. Restaurant business was cut by 60% during the initial COVID-19 response. COVID-19 also impacted how consumers shopped.

“When COVID awareness ramped up the week of March 7, households that might buy one gallon of milk a month bought three to five gallons to stock up initially, but their drinking habits didn’t change a lot,” Matt said.  “People overpurchased.”

For the next two weeks in March, Southeast milk plants processed more milk than usual as grocery stores scrambled to refill shelves, Matt said. From March 28-April 3, milk processors reduced their order for fluid milk as restaurants had fewer customers and demand for milk products decreased.

Bebermeyer said the milk supply has a chance to level out faster in the Southeast because most of the milk produced here is sold as fluid milk. Other regions that rely on cheese sales will need to see restaurants come back, he said.

“This is a problem affecting farmers across the country. The federal milk marketing order is allowing our financial loss to be pooled nationwide so the loss doesn’t fall on one farmer,” Matt said. “This means at the end of the month when the federal order settles up how milk is paid, the cost of dumped milk will be shared by dairy producers nationwide regardless of the co-op a farmer ships to. Co-ops are also sharing the loss across their members.”

Dairy groups worked to move milk through the pipeline with donations to healthcare workers, first responders & the needy.

How were farms selected?

Bebermeyer said DFA asked its farmers to dump their milk based on economic and disposal factors. Only South Georgia DFA producers were asked to dump milk.

Farms asked to dump milk are farther from a processing plant and have higher hauling costs. DFA also needed farms with lagoon capacity to hold the milk.

“The co-op tried to do this in a way that saved us the most money and is environmentally responsible,” Matt said.

What’s being done to help?

Early in the crisis, dairy co-ops and dairy groups asked stores to stop limiting how many dairy products customers could buy.

From April 24 to May 15, the Georgia Agricultural Commodity Commission for Milk (ACCM), partnered with DFA and Kroger for the Great Georgia Give campaign. About 24,000 half gallons of Georgia milk donated by DFA and Kroger were delivered to first responders and healthcare workers in Atlanta, Augusta, Macon and Savannah. Visit www.gfb.ag/GreatGAGives to read more.

The USDA Coronavirus Food Assistance Program (CFAP) includes $2.9 million for direct payments to dairy farmers. Sign-up began May 26. As part of CFAP, USDA will buy $3 billion of dairy, fresh produce and meat to assist farmers affected by COVID-19.                   Producers should talk with their creditors, says Jim Howie, member services manager of the Maryland & Virginia Milk Producers Cooperative (MVA), which markets milk for about 25 Georgia dairies in the Eatonton/Greensboro area and Millen.

“It’s important dairy producers be proactive with their lenders and suppliers to hopefully work through this [low milk prices & debt payments],” Howie said. “This is a situation that affects every aspect of the dairy industry, and we have to work together.”

“Everybody is on edge about what the price [of milk]  is going to do. We felt some impact for April milk, but the big price impact will be felt for May milk,” Howie said. “That’s when we saw the impact of less demand from the food service industry come to the forefront.”

COVID-19’s upheaval to the dairy market comes after years of poor prices.

“After six years of low prices, I’m concerned about the emotional toll this is going to take on our farmers,” Newberry said. “Not only are they worried about trying to keep their families and farm workers healthy, but they’re also having to deal with low prices again.”

Matt, who has been dairy farming for 21 years, is trying to focus on the big picture.

“I don’t think we’ll lose the farm, but if we do, it won’t be the end of the world,” he said. “As long as my family and my employees are healthy, we’ll be ok.”