National FFA President Doster Harper isn’t daunted by the changes COVID-19 has created for his organization. 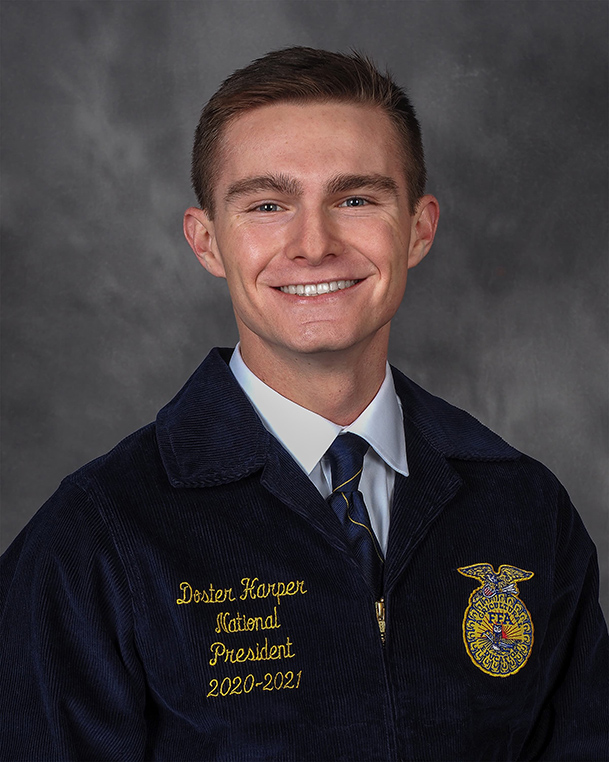 Doster Harper is serving as National FFA president during a historic time. | Photo courtesy of FFA

“What we do and how we do it may have changed, but there are still 760,113 students [nationwide] out there in agriculture education and FFA who have earned the right to be served,” Harper said after being elected. “I think I speak for all my teammates and myself when we say we’re here to serve these students and we’re here to do it in whatever way we get to do that.”

Through Feb. 25, Harper had connected with 31 local chapters in 14 states, all via videoconferencing. In years past, the national FFA officer team spent most of its term traveling. In 2021, they’re in apartments in Indianapolis doing all the organization’s business online.

Harper sees it as an opportunity to do something new.

Harper and his fellow officers hosted the first Horizon Conference, aimed at current FFA students and young alumni interested in pursuing careers in production agriculture. The Horizon Conference was originally intended to be conducted virtually, Harper said, and included opportunities for participants to interact with ag professionals.

“That conference was a huge success,” Harper said. “We thought this year would be the perfect year to try that conference out. It was a whole lot of fun.”

Harper appreciates the response he’s received from FFA chapters and members so far.

“The main thing students across the nation are craving right now is connection because we’ve been isolated for so long. Students are doing things they have never had to do before, like learning a math lesson from inside their bedroom by computer,” he said. “They miss their friends. They miss hanging out. It’s so positive and so energizing for us to see students’ faces light up and be able to just have conversations with other students.”

Harper was elected as National FFA president during the 93rd National FFA Convention, held virtually last October. He was elected from a field of 38 candidates to serve as one of six National FFA Officers for 2020-21. He is taking a one-year leave of absence from his studies at UGA, where he’s a junior agriscience and environmental systems major. Harper is a member of the Newton College & Career Academy FFA chapter.

Harper is the son of Lance and Debbie Harper of Covington. His ag ed teachers/ FFA advisors are Dr. Marcus Pollard, Cecily Gunter and Andrew Pollard.

“I think I speak for all my teammates and myself when we say we’re here to serve these students and we’re here to do it in whatever way we get to do that.”