This article was originally published in November 2021. It has been updated to report the latest detection of Asian Longhorned Tick

in Hall County in early May.

The Georgia Department of Agriculture announced May 3 that the Asian Longhorned Tick (ALT) species has been found in Hall County on multiple cattle on one farm. This is the first confirmation of the tick this year following detection of the tick species on a cow last fall on a Pickens County farm.

ALT is an invasive species with the potential to cause severe anemia and tick fever in livestock.

“The Asian Longhorned Tick looks very similar to other ticks in Georgia, so we don't expect people to be able to distinguish them. One distinctive aspect of Asian Longhorned Ticks is they tend to occur in large numbers. If an animal has one tick it's probably our common Lone Star Tick,” UGA Entomologist Dr. Nancy Hinkle said. “If a cow [or other animal] shows up with hundreds of ticks on it, we're going to be very suspicious that we're looking at an Asian Longhorned Tick infestation.”

Last September when the first confirmation of ALT was made in Pickens County, Georgia’s State Veterinarian Dr. Janemarie Hennebelle said she would not be surprised if more reports of ALT were made this spring because ticks hibernate in cool weather.

“We want folks to be on the lookout. It is likely that the tick will be identified in additional Georgia counties,” Hennebelle said. “Updates will be provided on our [Georgia Department of Agriculture] website going forward.”

GDA information on ALT in Georgia may be accessed at  https://gfb.ag/gdaaltupdates .

One female ALT can produce 1,000 to 2,000 eggs at one time without mating, APHIS reports. This is how a single animal could find itself hosting hundreds of ticks. 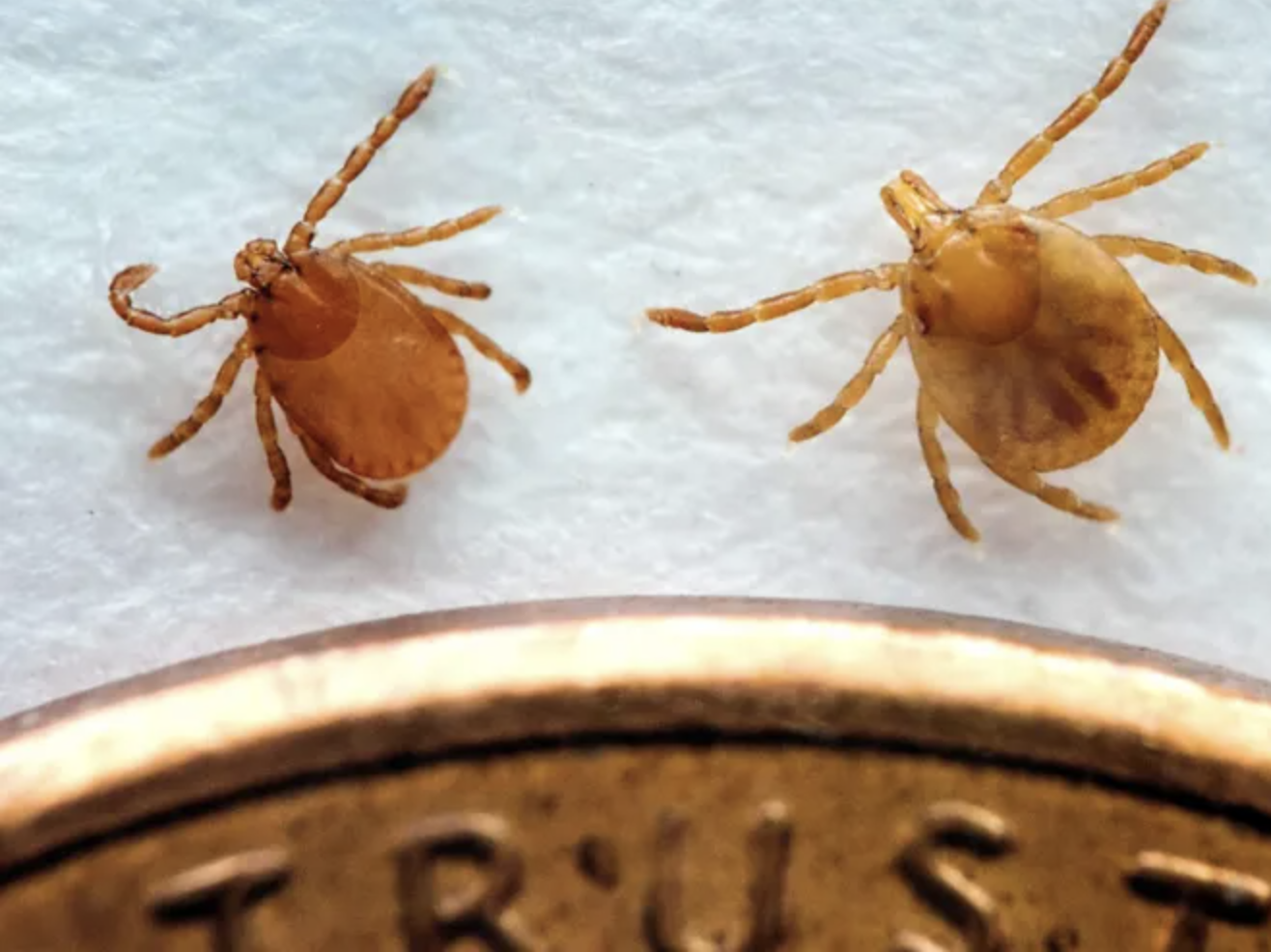 The Asian Longhorned Tick, left, is similar in size to Georgia's most common tick, the Lone Star Tick, right. / Photo Courtesy of UGA

APHIS explains that an individual animal with such a heavy infestation of ticks will be stressed and experience reduced growth and production. A severe infestation could potentially kill the animal from excessive blood loss.

In other countries with established ALT populations, the species can transmit bovine theileriosis (infectious anemia) to cattle and babesiosis (tick fever) to several domestic animal species, according to APHIS.

WHERE DID IT COME FROM?

This tick species is native to eastern Asia and had spread to Australia, New Zealand and western Pacific islands (New Caledonia, Fiji) by the early 1900s. In these countries, the species is called bush tick, cattle tick or scrub tick.

In late 2017, the USDA confirmed the ALT was present in the United States when the species was identified on a sheep in New Jersey, according to the New Jersey Division of Fish and Wildlife.

Since then, scientists have retrospectively identified archived tick samples that were previously unidentified as being an ALT. The samples were taken from:  a white-tailed deer in West Virginia in 2010; a dog in New Jersey in 2013, and a possum in North Carolina in 2017.

According to APHIS, the ALT probably arrived in the U.S. in or before 2010 via domestic pets, horses, livestock or people.

Since 2017, the species has been identified in 17 states, ranging from lower New England to Arkansas. Georgia is the latest state added to the list.

Other states where the ALT has been identified are: (listed geographically from north to south to west): Rhode Island, Connecticut, New York, New Jersey, Pennsylvania, Delaware, Maryland, Virginia, West Virginia, Ohio, Kentucky, Tennessee, North Carolina, South Carolina, Missouri and Arkansas, where it has been detected along the state’s border with eastern Oklahoma. 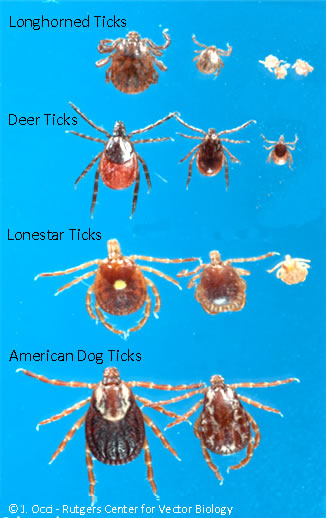 WHAT SHOULD PRODUCERS DO IF THEY DISCOVER A SUSPECTED ALT INFESTATION?

Georgia livestock producers are encouraged to help UGA and the GDA determine the extent of the ALT’s presence in the state by monitoring their cattle, goats, horses and sheep for large infestations of ticks.

“I want folks to take a step back and not just think about Pickens County. Any warm-blooded animal is a potential host,” Georgia State Veterinarian Janemarie Hennebelle said. “In other states, the No. 1 species this tick is being found on is dogs.”

Anyone who finds large infestations of ticks on any one animal - cattlemen, horse people, backyard poultry producers, pet owners, hunters - should call their veterinarian and report it to the Georgia Department of Agriculture Animal Health Division at 404-656-3667.

“Ticks hibernate when it cools off. I won’t be surprised if we see more reports in the spring,” Hennebelle said. “We want folks to be on the lookout.”

The GDA recommends that livestock producers or backyard poultry growers work with their veterinarian and/or UGA Cooperative Extension agent to develop an appropriate strategy to fight tick infestations of any type.

“Right now, all of your normal tick control products are going to work on controlling the Asian Longhorned Tick, so you don’t have to deal with an infestation and the consequences if you are already treating your animals with preventative tick medicine,” Hennebelle said. “Work with your veterinarian and your Extension agent to develop a control program.’

Visit www.gfb.ag/UGAlivestockpestmanagement  and scroll down to the section on ticks for a list of pesticides UGA Cooperative Extension recommends for treating cattle and other livestock for ticks. All treatment should be done in consultation with a veterinarian to ensure proper withdrawal times are observed and that a product is not overused to allow resistance to a product to build.

“The good news is that products registered for use on cattle that are recommended for other tick species will be effective against ALT,” Hinkle said.

Since the summer of 2019, Hinkle has been conducting a study to watch for the expected arrival of the ALT in Georgia and collect baseline information on existing tick populations related to Georgia cattle prior to the ALT’s arrival.

The Georgia Beef Commission partially funded Hinkle’s study, which helped lead to finding the presence of ALT in Georgia.

“Dr. Hinkle told the Georgia Beef Commission in 2018 that this tick had shown up in New Jersey. She told us ‘It’s not a matter of if, but when it shows up in Georgia,’ and here we are,” Georgia Beef Commission Chairman John Callaway recalled. “I think this has been money well spent to get a baseline to know where Georgia was on tick populations before the Asian Longhorned Tick arrived.”

Hinkle’s baseline data shows that prior to the arrival of the ALT in Georgia, there were 22 species of ticks in the state. Some of these species were only found on the gopher tortoise or squirrels.

“In our study, we found only two tick species on cattle - the Lone Star Tick and the American Dog Tick, both of which have very broad host ranges,” Hinkle said. “In our survey, 82 percent of the ticks on cattle are Lone Star Ticks. We never found more than a half dozen ticks on a cow at one time. Best of all, only 3 percent of sampled cattle had any ticks. So, Georgia cattlemen are doing something right.”

Hinkle says the Lone Star Tick (Amblyomma Americanum) is the most common tick in the Southeast and can be found on a wide range of animals.

“If you have a tick on you, the vast majority of times it will be a Lone Star, same with your dog, or other animals,” Hinkle said.

About 500,000 head of cattle are sold annually in Georgia, Callaway said. Cattle producers pay a $1 per head assessment for each cow sold to fund research projects, such as Hinkle’s, that address beef production and marketing issues along with educating consumers about the nutritional value of beef.

“It’s [arrival of ALT] just one more thing that [beef] producers will have to contend with,” Callaway, who raises beef cattle in Troup County, said of the arrival of the new tick species in Georgia.