The Jimmersons, who grow row crops and vegetables and raise cattle on their Colquitt County farm, won the GFB YF&R

Achievement Award, which recognizes efforts in production agriculture and leadership among young farmers and ranchers who earn the majority of their income from production agriculture. As the state-winning family, the Jimmersons receive $500 cash, a four-seater John Deere ATV and trailer, a year’s use of a Kubota M Series tractor and an expense-paid trip to the 2020 AFBF Convention in Austin, Texas.

Steven and Tara Green of Spalding County and Mitchell and Becky Pittman of Toombs County were finalists for the Achievement Award, each receiving $500 cash. The Greens raise poultry, cattle and hay, and sell and spread chicken litter. The Pittmans grow watermelons, a variety of vegetables and row crops, and they operate a roadside market.

The Kinsauls won the GFB YF&R Excellence in Agriculture Award, which recognizes young farmers and ranchers who earn the majority of their income from something other than production agriculture. Rachel Kinsaul is an agriculture teacher in Morgan County while Jason works as an agricultural lender for Rabo Agrifinance. As the state winners they receive $500 cash, a two-seater John Deere ATV and trailer and an expense-paid trip to the 2020 AFBF Convention, where they will represent Georgia in the competition for national honors during the 2020 AFBF Convention. 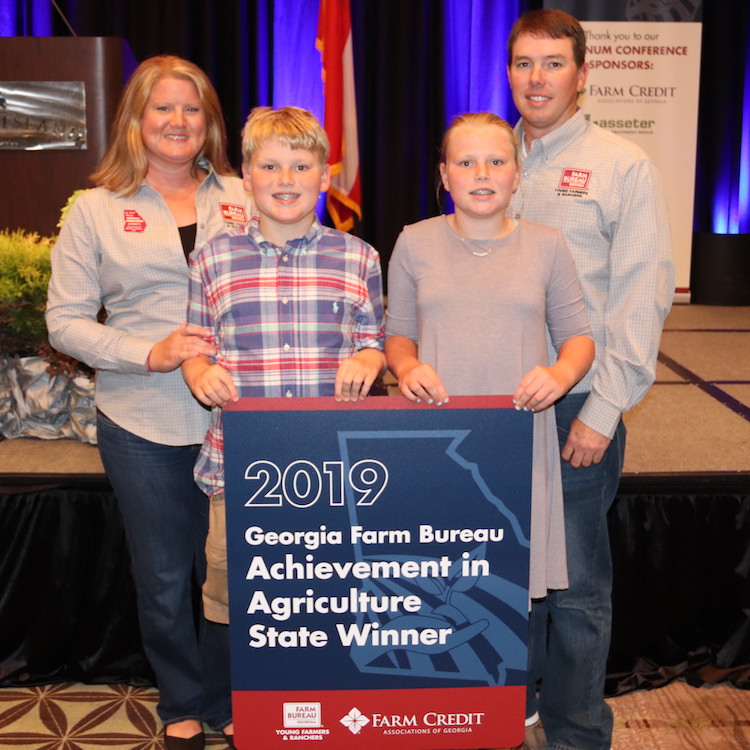 Becca Creasy of Bulloch County and Melissa Mathis of Monroe County were finalists for the Excellence in Agriculture Award. Each received $500 cash. Creasy and her husband, Jarrod, operate 920 Cattle & Company, raising beef cattle, growing hay, installing fences and selling meat directly to the public. Mathis operates two farm supply stores, one in Monroe County and one in Jasper County.

Marchant won the GFB YF&R Discussion Meet, prevailing over 24 other competitors from a total of 22 counties. In the Discussion

Meet Final Four, Marchant and finalists Newt Gilman, Cleve Jackson and Marcus Pollard talked about how Farm Bureau can collaborate with other organizations to combat crises like opioid addiction and mental health issues. The discussion meet is structured as a county commission-style forum where competitors search for common ground and solutions for issues affecting agriculture.

As the state winner, Marchant received $500 cash, a two-seater John Deere ATV and trailer and an expense-paid trip to the 2020 AFBF Convention. She teaches agriculture at Morgan County High School.

The three finalists each received $350. Jackson is a sales representative for Bayer Animal Health and runs a commercial cow/calf operation. Gilman raises hair sheep and works as a farm loan officer with the USDA. Pollard teaches agriculture courses in Newton County, is a certified beekeeper and raises Charolais show cattle.

Pridgen, of Coffee County, won the YF&R Member of the Year Award, 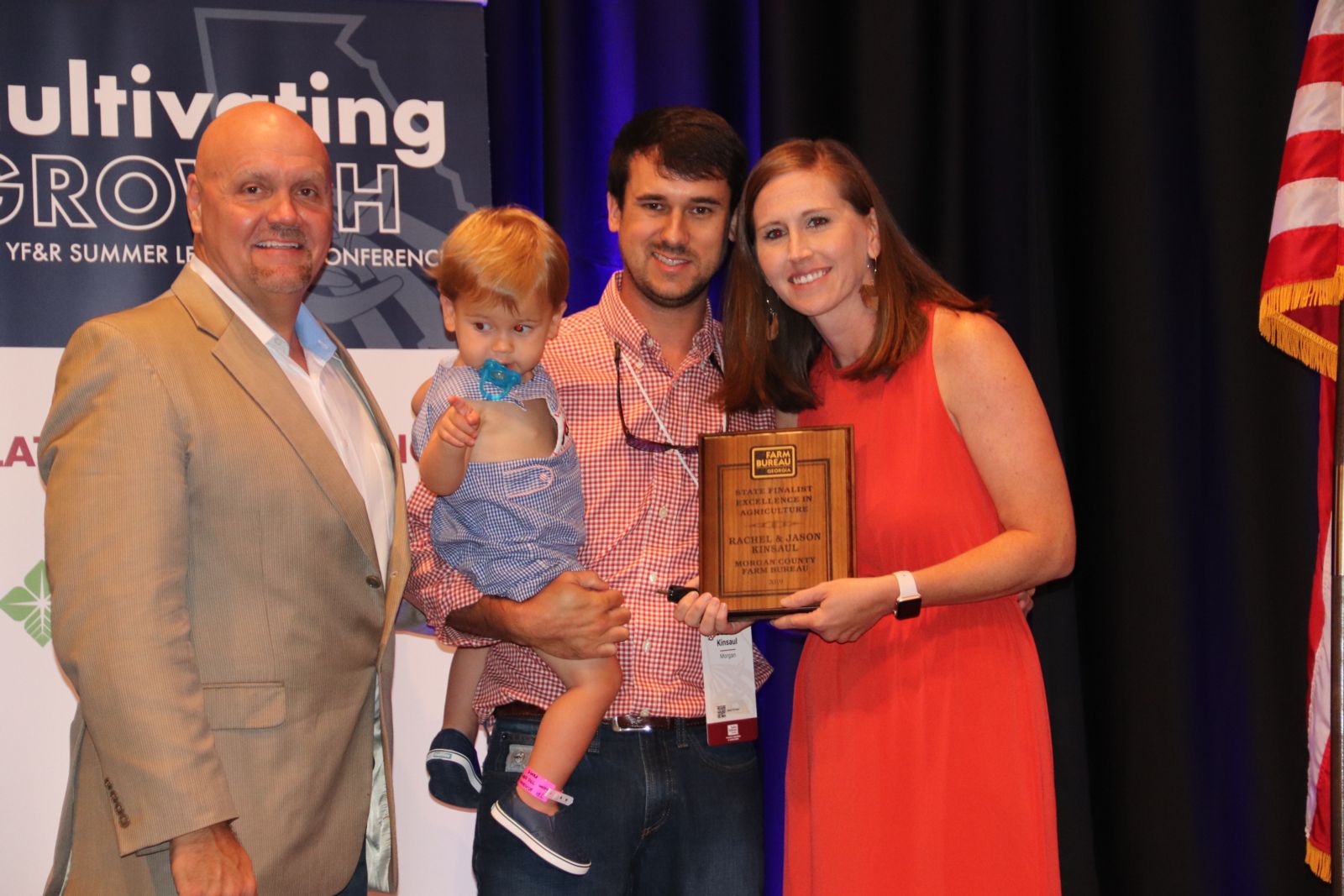 which GFB presented for the first time. He and finalists Will Cabe of Franklin County and Chy Kellogg of Cobb County submitted videos about their farms and volunteer work. The videos were shown at the YF&R Leadership Conference and attendees voted to

determine the winner. As the state winner, Pridgenreceived $250 cash. The two runners-up each received $150 cash.

Pridgen manages 11 poultry houses, grows hay and raises cattle. Pridgen is president of South Georgia Cattlemen and speaks to other organizations to promote agriculture, and he volunteers as a judge for area FFA events. Cabe raises beef cattle, broilers and club goats. He is extensively involved in the Franklin County Cattlemen’s Association, Georgia Young Cattlemen’s Council and the AgGeorgia Farm Credit Advisory Board. Kellogg raises garden vegetables, selling them at farmers markets, and does contract work for the Georgia Association of Conservation Districts. She volunteers to teach Ag in the Classroom lessons at local schools and at various farms. 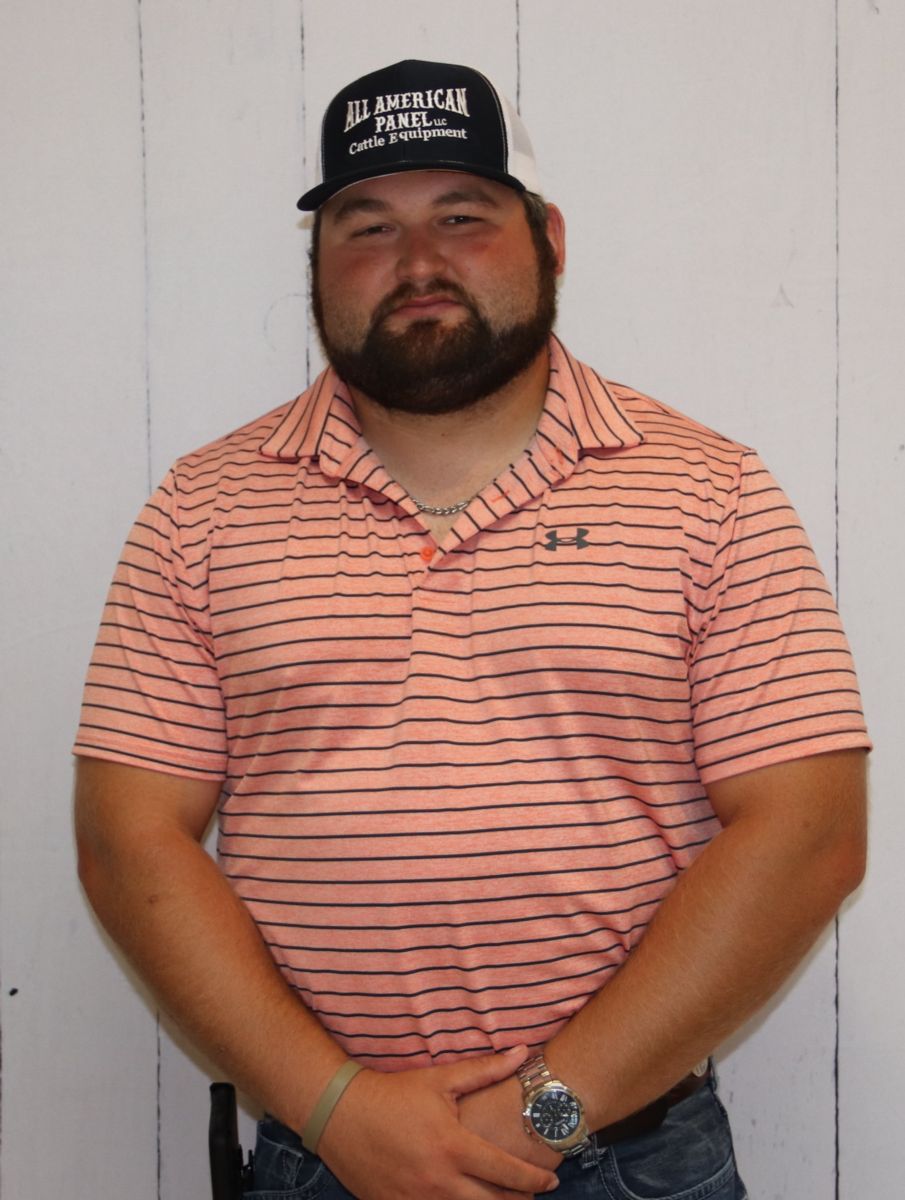