Tale of a book illustrator

Ward Jenkins started with a blank canvas when he began illustrating “Tales of a Dairy Godmother: Chuck’s Ice Cream Wish.”

“I didn’t know the difference between a dairy farm and other farms,” said Jenkins. “So, the fact that there’s a dairy farm that’s a very specific thing - I’m like, oh, wow. But now knowing that, it makes sense.”

Jenkins produced the illustration for the book, working in collaboration with author Viola Butler. The American Farm Bureau Foundation for Agriculture named the book its 2021 Book of the Year. The award is given to children’s books that accurately depict agriculture.

While the Dairy Godmother is a fantasy character, the cows in the book are not. By design, they don’t talk or exhibit human behavior.

Rock House was one of three dairies Jenkins visited to learn how milk is produced and how ice cream is made. It was the smallest of the three farms, and the only one that had a creamery on site. Being there made Jenkins feel like a kid.

“The way I drew it and the way I depicted each scene was as if I was one of the kids reading it,” he said. “I like to think of myself as a kid at heart. I look at things the way kids would with a curious nature.”

In the drawing lesson Jenkins gave during the Farmtastic Fun Day, he broke the process of drawing a cow down almost line-by-line, beginning with the idea that the picture would end up showing a cow doing what cows love to do: eat. 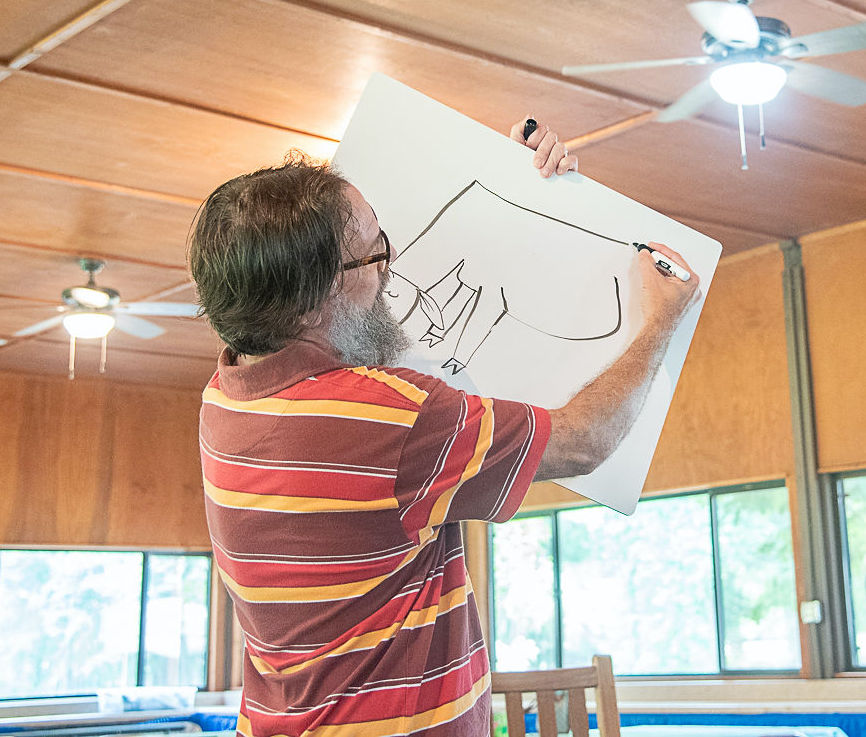 Ward Jenkins taught children how to draw a cow during the Farmtastic Fun Day event. | photo by Logan Thomas

One line for the back, two more for the cow’s neck, a couple of arcs positioned to show its head, little loops for ears, and so on.

Jenkins grew up in DeKalb County. He spent some time in Portland, Oregon, before he found himself back in DeKalb, where he and his wife, Andrea, live. They have two children, Ava, age 21, and Ezra, 17. His only experiences with agriculture as a child were visiting Mathis Dairy and milking Rosebud, the dairy’s locally famous cow, and afterward receiving an “I milked Rosebud” button.

Through the process of illustrating the book, he gained an appreciation for dairy farms, to the point where he feels compelled to share his newfound knowledge and in some cases correct statements from other people about dairy farming.

“When I get sign-offs from people who are dairy farmers, then I see them reading to the kids ... I’m very proud of that,” Jenkins said.

To purchase copies of the book, visit www.dmsfulfillment.com/FarmBureau.