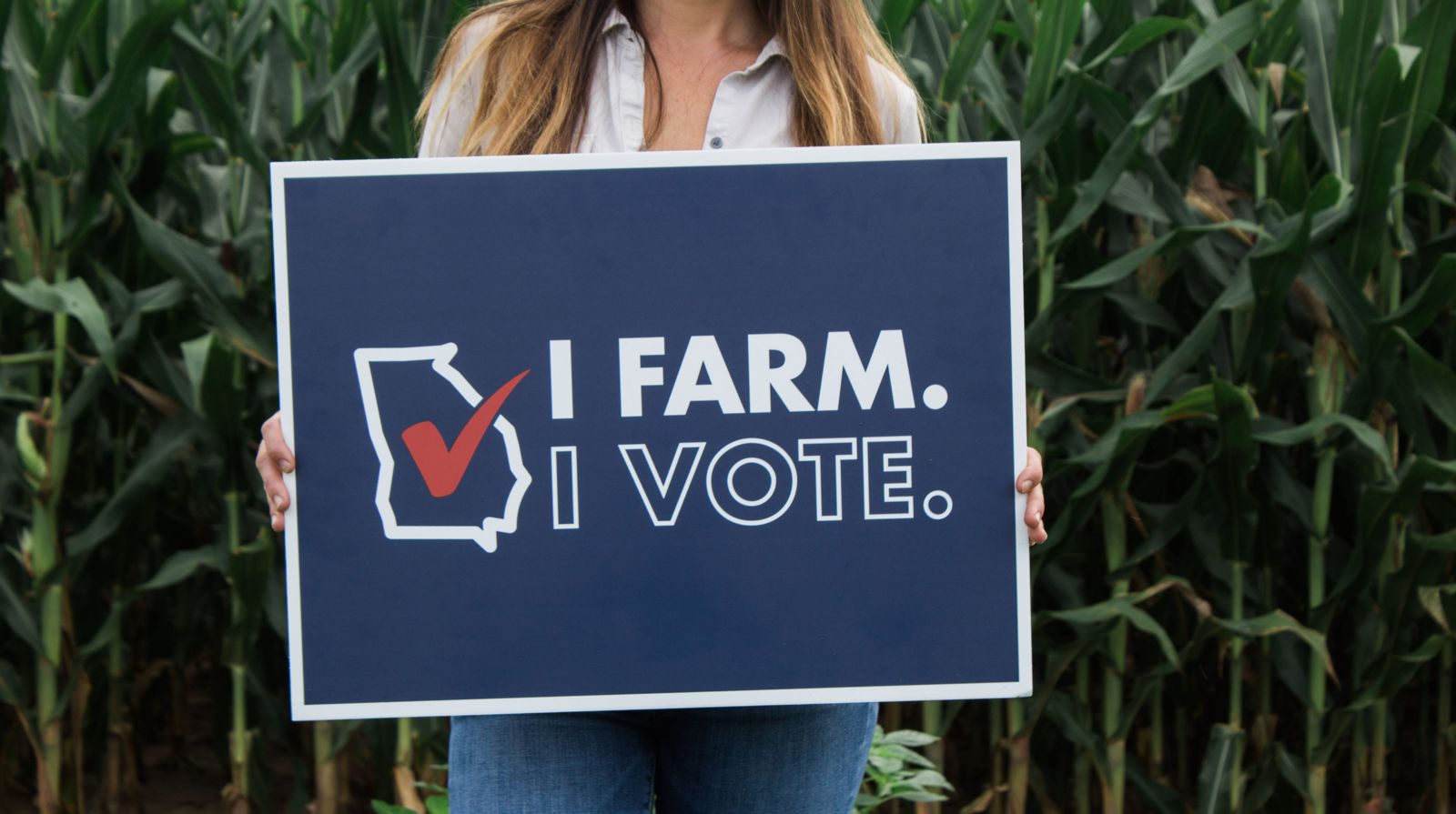 Priority Issues at the State Level

Georgia Farm Bureau has designated the following as the most important legislative issues facing farmers and the agriculture industry in Georgia. Please take a moment to learn more about these issues and how they could impact our state.

Priority Issues at the Federal Level

As you know, Hurricane Michael impacted the Southeastern U.S. in October 2018, and for many Georgia farmers, the storm could not have come at a worse time. The agricultural losses in Georgia were estimated to be around $2.5 billion across a range of commodities. Fortunately, members of the Georgia congressional delegation successfully secured a disaster relief package in June 2019 that included $3 billion to help farmers across the nation recover from extreme weather events.

You may recall that the disaster assistance package approved by Congress included two funding delivery vehicles—the Wildfire Hurricane Indemnity Program (WHIP) and a state block grant option. Though Georgia producers were relieved when USDA began accepting WHIP applications near the end of 2019, many are still waiting to receive a portion of the promised, much-needed assistance. GFB urges Congress to monitor USDA’s implementation of the WHIP program to ensure that those producers who are in need of assistance are able to access it as quickly as possible.

In February 2020, USDA officially approved a $347 million farm recovery block grant. The block grant will be administered by the Georgia Department of Agriculture, which will begin accepting applications on March 18. Georgia Farm Bureau (GFB) appreciates the efforts of our congressional delegation to secure this flexible option for our state, and we encourage members and staff to work with Georgia Governor Brian Kemp and Georgia Agriculture Commissioner Gary Black to ensure the block grant is administered quickly and efficiently.

With commodity prices still hovering at historically low levels and so much uncertainty surrounding U.S. trade policy, the farm safety net is as vital as it has ever been for Georgia farmers. GFB appreciates the efforts to the Georgia congressional delegation during the farm bill reauthorization process in 2018, and we are grateful for the improvements made to the federal commodity support programs and more. However, the positive changes made in the 2018 farm bill could be undermined by arbitrary funding reductions during the appropriations process. GFB urges members to support full funding for the farm safety net as the FY2021 appropriations process gets underway.

Farmers have long experienced difficulty in obtaining individuals who are willing and able to work on farms. Jobs in agriculture are physically demanding, conducted in all seasons, and often transitory. To most U.S. residents seeking employment, these conditions are not attractive. Yet for many prospective workers from other nations, these jobs present real economic opportunities.

According to the United States Department of Agriculture (USDA), agriculture needs between 1.5 and 2 million farm workers a year to carry out the work required to sustain the current demand for American products. Many farmers turn to the H-2A program for their labor needs. Unfortunately, the H-2A program is cumbersome and costly, leading many farmers to ultimately avoid using it. Additionally, individuals from other nations who wish to work in the U.S. and have trouble entering the country legally, end up crossing our border illegally to find work. According to USDA estimates, more than half of individuals working in U.S. agriculture are undocumented, and GFB believes the flawed H-2A program is at least partially to blame.

As you may know, the U.S. Department of Labor (DOL) released a proposed rule this past summer designed to improve the H-2A program to the benefit of farmers and those who wish to work in the U.S. legally. While it was far from perfect, the proposal included some positive reforms to streamline the program and increase flexibility. Georgia Farm Bureau (GFB) submitted comments on the proposed changes to the H-2A program, and we expect a final rule to be issued soon. As the rulemaking process continues, we urge members and staff to monitor developments and carefully consider the impact that the final rule will have on Georgia farmers.

GFB supports efforts to reform the H-2A program via the regulatory process, but certain reforms—such as program access for year-round agriculture industries—will require congressional action. As you know, H.R. 5038, the “Farm Workforce Modernization Act of 2019” was approved by the House in December 2019, and though GFB is pleased that Congress is considering agriculture immigration reform legislation, we believe H.R. 5038 falls short in several key areas. In fact, the American Farm Bureau Federation (AFBF) Board of Directors—on which GFB President Gerald Long sits—voted unanimously to oppose the bill in its current form. However, GFB and AFBF stand ready to work with members on both sides of the aisle to address the issues with H.R. 5038 and produce an agriculture immigration reform bill that will benefit farms and farm workers alike.

Each year about one-fifth of U.S. agriculture production is exported to foreign markets—accounting for more than 20% of farm income in America. It is no secret that farmers have been negatively impacted by the recent trade disputes with many of our closest trading partners, as most nations have chosen agricultural commodities as the target for retaliatory tariffs. Though several trade disputes with some of our largest trading partners have either been resolved or scaled back, Georgia Farm Bureau (GFB) believes it is imperative for Congress to work with the Trump Administration to bring to a close the remaining trade disputes and continue negotiating to open new markets for U.S. agriculture products.

GFB is pleased that the Trump Administration—with the support of Congress—recently secured a new trade deal with Canada and Mexico, two of the U.S.’s largest trading partners. Though many Georgia producers will continue to benefit from the preferential trade treatment between our three nations, GFB remains concerned about the lack of an enforceable remedy for seasonable and perishable products in antidumping and countervailing duty proceedings. We are grateful, however, that Georgia’s congressional delegation worked to extract a promise from the U.S. Trade Representative (USTR) to address the issue, as outlined in USTR’s January 2020 delegation letter. GFB urges our congressional delegation to ensure that USTR, the U.S. Department of Commerce, and the U.S. Department of Agriculture honor their commitment to investigate and address the alleged unfair trade practices from Canada and Mexico in a timely manner.

As noted earlier, the ongoing trade disputes with many of our largest trading partners have taken a toll on agricultural producers across the nation, and without the assistance provided by the Market Facilitation Program (MFP), many Georgia farmers would not have been able to continue operating through the tough times. Though there have been positive developments in recent months as new trade deals being reached with several U.S. trading partners, including Japan and China, GFB believes a third round of MFP payments should not be ruled out. As President Trump recently said, it will take time for farmers and U.S. consumers to begin benefiting from the new deals—particularly as China struggles to contain the spread of the coronavirus. GFB requests that Congress continue to monitor both implementation of the new U.S. trade deals and the ongoing trade disputes to determine their impact on agricultural producers. Should it become clear that there is a need for additional MFP assistance, GFB urges Congress to support a third round of payments in 2020.

Waters of the United States (WOTUS)

In 2015, the U.S. Environmental Protection Agency (EPA) and the Army Corps of Engineers (ACE) released a new "waters of the U.S." (WOTUS) rule, which threatened to bring under federal jurisdiction nearly every kind of waterway imaginable—from rivers and streams to ditches and rainwater flows. Georgia Farm Bureau (GFB) stood in opposition to the 2015 WOTUS rule for years. Our membership submitted roughly 15,000 comments for the 2015 rule—by far the most comments we have ever submitted on a policy issue. GFB was pleased when President Trump announced his opposition to the 2015 WOTUS rule and a desire to replace it shortly after taking office.

On January 23, 2020, EPA and ACE released the final version of the new Navigable Waters Protection Rule, which replaces the Obama Administration’s 2015 WOTUS rule. The new rule clearly identifies four categories of waters that will be federally regulated, along with twelve categories of waters that will be regulated by state and local governments. Going forward under the new rule, Georgia farmers should have a great deal more clarity and certainty when making regulatory determinations for waterways on their properties. GFB urges members of Congress to support the new rule and monitor its implementation.

Federal Hours of Service (HOS) and Electronic Logging Device (ELD) regulations were intended to improve road safety in the U.S. by forcing long haulers to pull off the road and rest for ten consecutive hours after extended periods of driving. Though that may work well for drivers hauling electronics, clothing, or other non-perishable goods, these one-size-fits-all rules are simply unworkable for those hauling live animals and fresh fruits and vegetables. Though Congress has provided a short-term reprieve from the ELD mandate for transporters of livestock and insects, if further action is not taken by September 30, 2020, many farming operations could soon be forced to choose between complying with federal regulations and protecting their animals. GFB urges Congress to work with the Trump Administration and the agriculture industry to develop a permanent solution which balances the need for road safety with the unique needs of the agriculture industry.