On Monday, April 4th, the 2022 Legislative Session came to a close with the General Assembly adjourning Sine Die shortly after midnight. This marks the end of the two-year biennium and the start of what is to be a busy campaign season, with many legislators either retiring from public service or seeking higher office.

On the final legislative day there was a great deal of work done as lawmakers sought to wrap up legislative priorities and pass the FY23 budget, a task they are constitutionally bound to complete. On Legislative Day 40, Georgia Farm Bureau (GFB) saw the passage of its spotlight issue, the Freedom to Farm Act, and another priority issue, the Georgia Raw Dairy Act. Out of the 1170 bills that were introduced during this year’s session, only some were passed by both the House and Senate, now having 40 calendar days to be signed into law by the Governor. The deadline for the Governor to sign a new bill into law is May 14.

GFB staff have been at the Capitol each day of the legislative session to ensure our members were well represented and to push our priority issues forward. We are proud to serve as your voice under the Gold Dome in Atlanta, working to protect Georgia’s number one industry. To see a final summary of the bills that passed this session, please continue reading below. 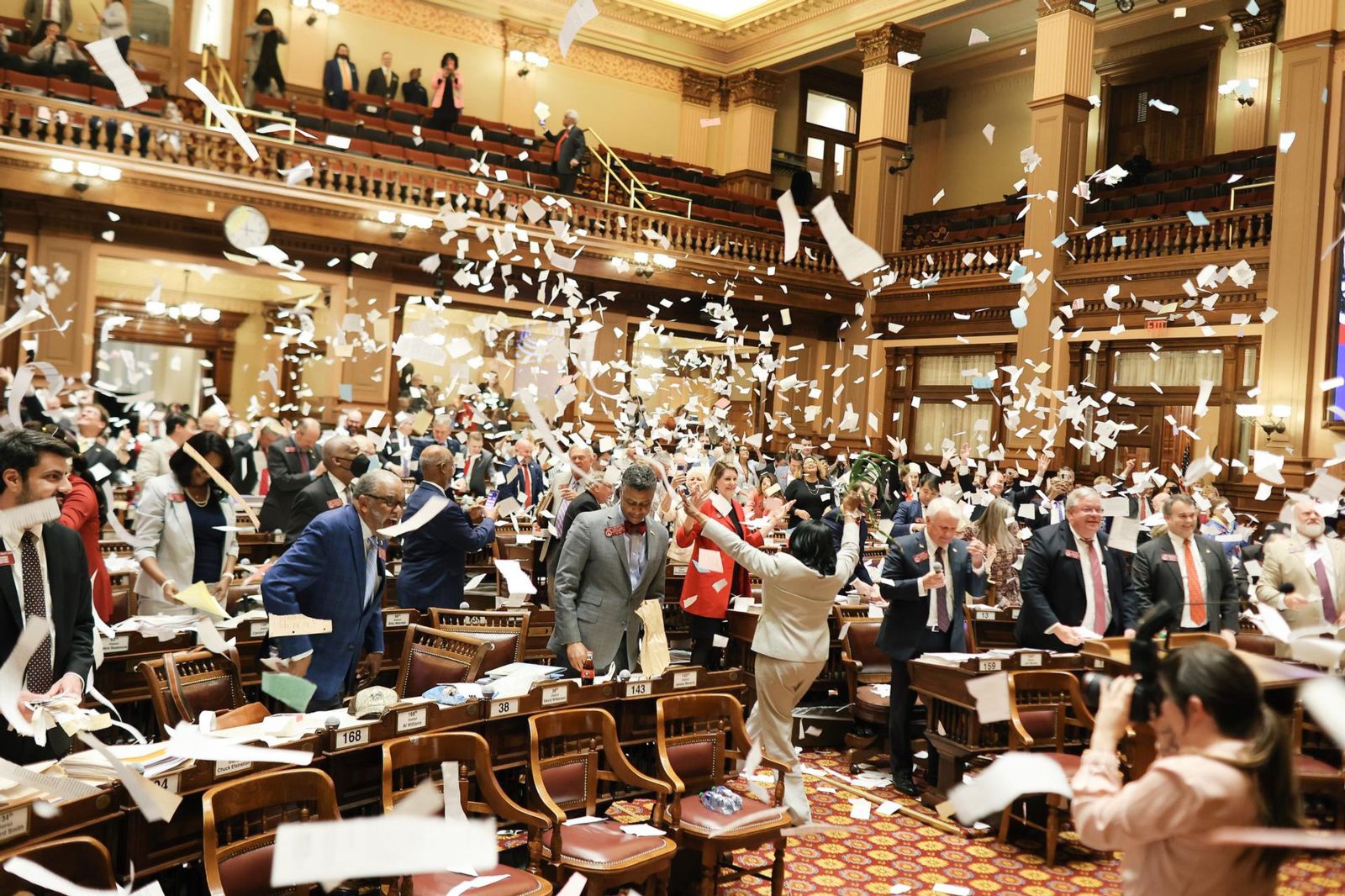 Georgia Farm Bureau’s spotlight issue, the Freedom to Farm Act, received an agree vote in the House this week on the final day of the 2022 Legislative Session, also called Sine Die. With this vote of Y:106 to N:60, HB 1150 received final passage and is on its way to the Governor’s desk where it must now be signed into law. Despite a great deal of opposition coming from environmental groups and others, GFB and allied agricultural organizations were able to dispel much of the false information being pushed about the motivation for this bill. The legislation was heard a total of five times by the House and Senate Agriculture committees, with each committee making changes to balance the rights of farmers and neighbors while still ensuring strong protections for agriculture against nuisance lawsuits. The Freedom to Farm Act has been many years in the making and will pay off for many years to come as the ever-changing landscape of Georgia presents additional challenges to our state’s farm families.

HB 1150 will provide agricultural operations with protection after two years of operating so long as they are complying with all laws, rules, regulations, and local zoning ordinances. Nothing in this bill negates any environmental law or the ability of local governments to determine where farms can be located and operate. The bill even resets the 2-year window of opportunity for someone to bring a nuisance suit if a farm starts a concentrated animal feeding operation (CAFO). GFB would like to thank the chairmen of each Agriculture Committee, Rep. Robert Dickey (R-Musella) and Sen. Larry Walker (R-Perry), for their hard work and dedication in getting this bill across the finish line. This undertaking took the collective efforts of many other agricultural organizations including the Georgia Agribusiness Council, Georgia Cattlemen’s Association, Georgia Forestry Association, Georgia Fruit and Vegetable Growers Association, Georgia Green Industry Association, Georgia Milk Producers, Georgia Poultry Federation, and the Georgia Urban Ag Council, as well as other state business partners including the National Federation of Independent Business and the Georgia Chamber.

We would also like to thank all the GFB members who actively engaged alongside us by getting in touch with their legislators to advocate for this issue. Without the strong grassroots support of our members, major legislative efforts like this one would not be possible. 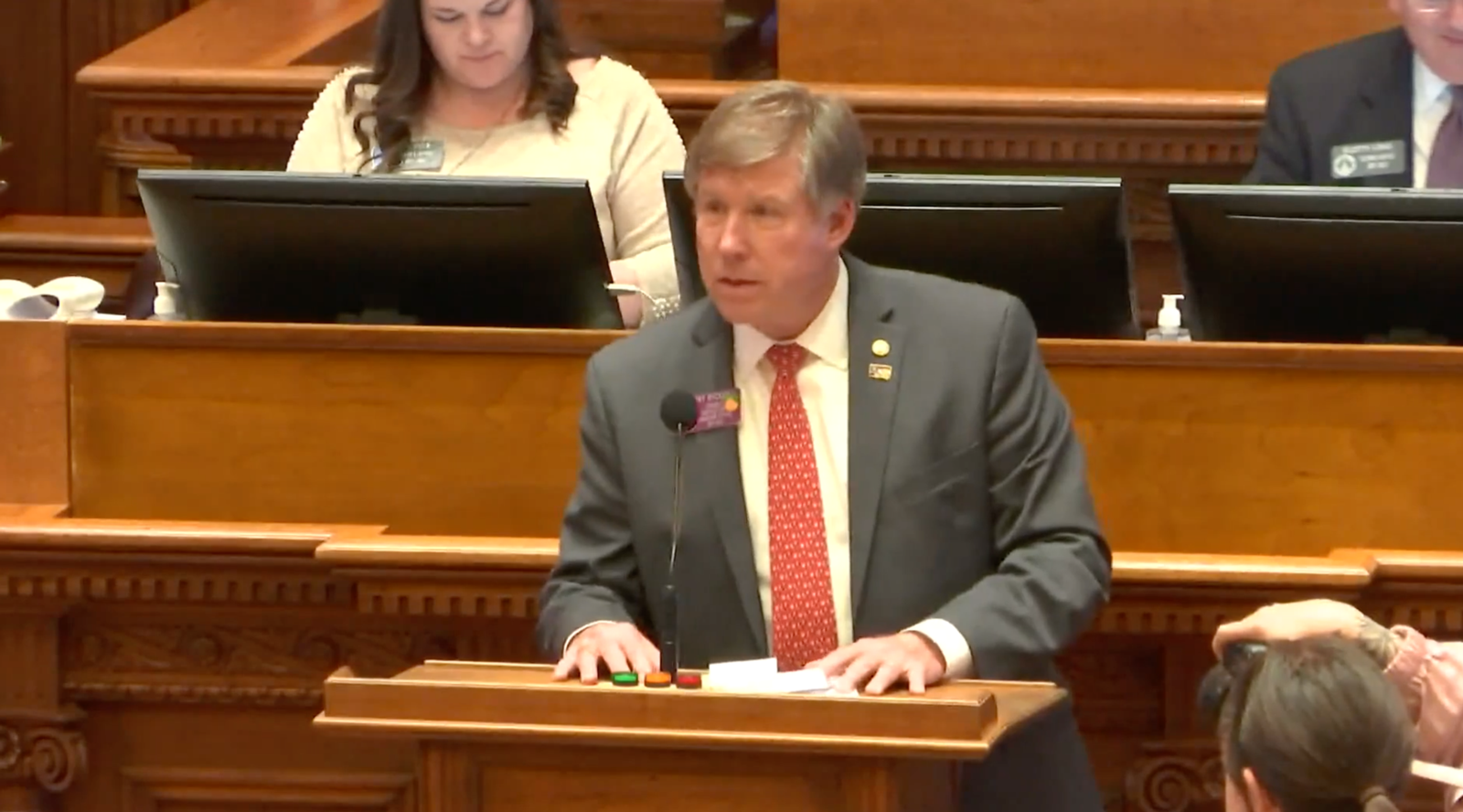 Along with HB 1150, another GFB priority issue, the Georgia Raw Dairy Act, received an agree in the House on Monday with a vote of Y:110 to N:55, sending it to the Governor’s desk for his signature. GFB has worked closely with the Georgia Agribusiness Council, Georgia Milk Producers, and the Georgia Cattlemen’s Association for multiple years to determine the best path forward on this issue and ultimately towards the passage of this legislation. Under existing law, raw milk can only be purchased under a pet milk label that is administered by the Georgia Department of Agriculture with no safety testing or regulations in place. The Georgia Raw Dairy Act ensures that the raw milk being sold and consumed is as safe as it can possibly be. Under the current pet milk label, the risk for someone to get sick and put a blemish on the dairy industry as a whole is very high. This legislation not only protects the longstanding reputation of the dairy industry, but it provides a legal way for smaller dairy producers to sell raw milk. For some dairies, this could be a lifeline as raw milk demand has soared in recent years and can bring a premium price. With the passage of this bill, raw milk will be legal to sell for human consumption under a set of safety protocols and a regulatory framework that promotes consumer confidence.

We want to thank Rep. Clay Pirkle for sponsoring this legislation and for the great deal of time and effort he put in to making the necessary changes that ultimately led to the bill’s final passage. Without the efforts of Rep. Pirkle, our allied organizations, and all the GFB members who have reached out to their legislators over the recent days and weeks, this would not have been possible. 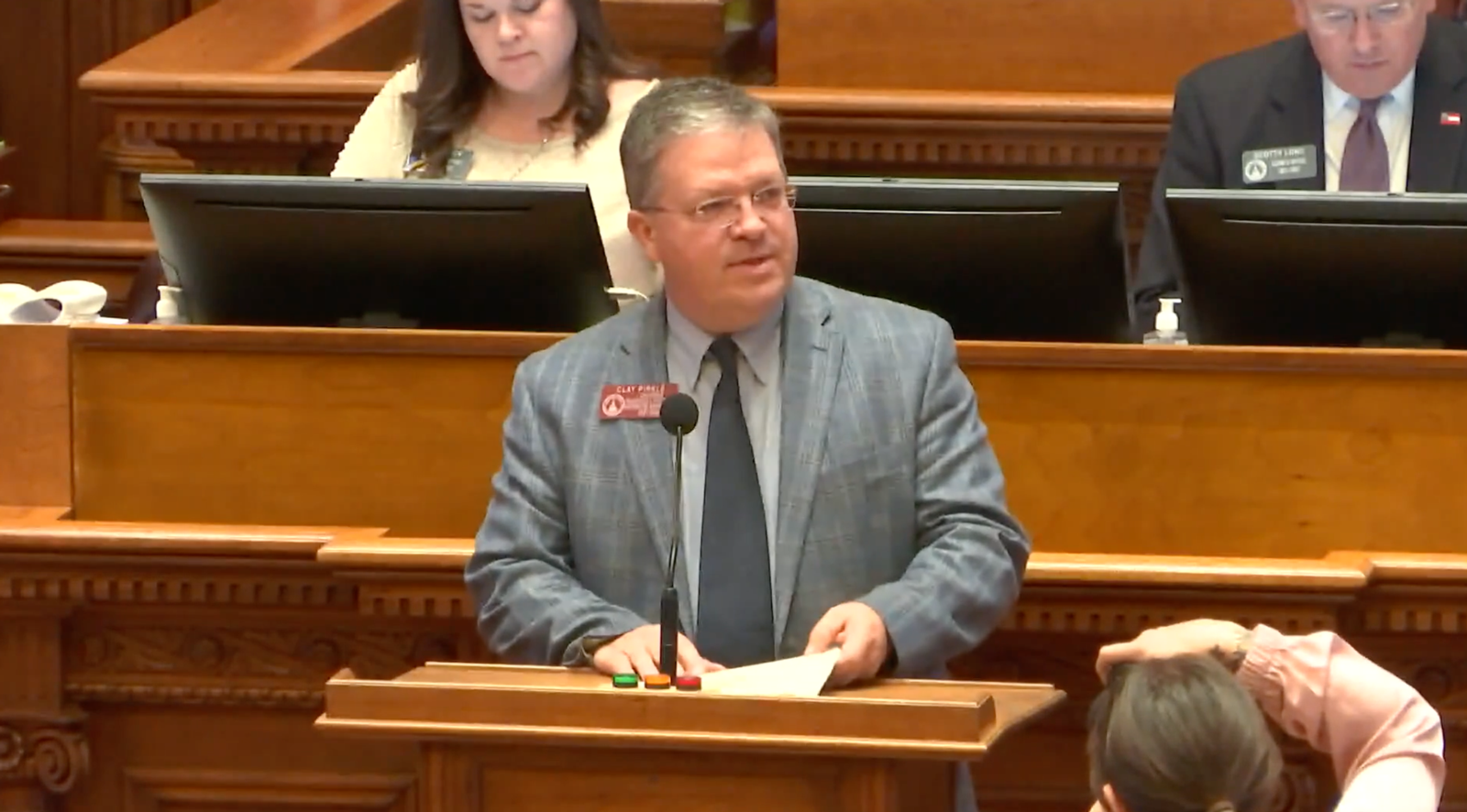 On the final legislative day, a conference committee report on HB 911 was agreed to by both the House and Senate, sending the FY23 budget to the Governor’s desk. GFB would like to thank Governor Kemp and Appropriations Chairmen Rep. Terry England (R-Auburn), and Sen. Blake Tillery (R-Vidalia), for their hard work on this year’s budget and for their continued support of Georgia agriculture. Please see below for highlights of this year’s budget and what’s been included to support Georgia’s number one economic driver.

To find more on a specific bill, visit the Georgia General Assembly website and use the "Search Legislation" tool at the top right.

HB 997:
Reps. Watson, England, Burns, Buckner, Hatchett, and others
This proposal would provide for a statewide constitutional referendum and question on the 2022 ballot to allow for an ad-valorem tax exemption on timber equipment and products. Equipment that would be exempt under this bill includes logging equipment such as wood cutters, loaders, bulldozers, skid steers, etc. Also included in the exemption would be timber products such as trees and other wood fiber products.
House Passed/Adopted by Substitute on 3/15/2022. Senate Passed/Adopted on 3/30/2022.

HB 1041:
Reps. Pirkle, Jasperse, Watson, England, Corbett, and others
This legislation increases the available tax credits for contributions to rural hospitals from $65 to $75 million per year.
House Passed/Adopted by Substitute on 3/11/2022. Senate Passed/Adopted on 3/30/2022.

HB 1150:
Reps. Dickey, Watson, England, Jasperse, and Pirkle
Also known as the Freedom to Farm Act, HB 1150, addresses ambiguity in Georgia’s current Right to Farm statute and seeks to protect farmers from frivolous nuisance claims brought by those who do not like the inherent aspects of agriculture. With Georgia’s number one economic driver being agriculture, there is a vested interest in protecting the families and businesses that provide all of our food and fiber. There has been an increase in the number of nuisance claims brought against Georgia farms due to recent federal court precedent that turns current Right to Farm law on its head. This bill would allow for a farm to have certainty after a period of time, as long as they are operating within the law and according to all rules and regulations, that they will be protected from unnecessary nuisance lawsuits.
House Passed/Adopted by Substitute on 3/3/2022. Senate Passed/Adopted by Substitute on 4/1/2022. House Agreed to Senate Substitute on 4/4/2022.

HB 1175:
Reps. Pirkle, Camp, Campbell, and Jenkins
This proposal comes out of a summer study committee consisting of members from the House Agriculture Committee. Chaired by Rep. Clay Pirkle, the committee looked into the issue of legalizing the sale of raw milk for human consumption. With the technological advancements in the dairy industry that provide for a very consistently safe product, many believed there was a way to produce raw (unpasteurized) milk that would be safe for human consumption. Many in the dairy industry, especially smaller producers, have been seeking a way to increase their already slim margins with a product like raw milk that brings a premium price due and has an increasing consumer demand. This bill would allow for the legal sale of raw milk for human consumption under a set of specific rules and regulations that seek to ensure a safe product.
House Passed/Adopted by Substitute on 3/3/2022. Senate Passed/Adopted by Substitute on 4/1/2022. House Agreed to Senate Substitute on 4/4/2022.

HB 1303:
Reps. Dickey, England, Pirkle, Erwin, Bentley and others
This bill would transition a pilot program that has been in place for elementary agricultural education to an ongoing and permanent program. It would also require schools to hire an elementary agricultural education teacher to administer the program.
House Passed/Adopted on 3/1/2022. Senate Passed/Adopted by Substitute on 3/22/2022. House Agreed to Senate Substitute on 4/1/2022.

HB 1384:
Reps. Jenkins, Camp, Greene, Jasperse, and Knight
This proposal would allow for the use of ungraded lumber in the construction or repair of any uninhabited structure on property zoned for residential or agricultural use.
House Passed/Adopted on 3/11/2022. Senate Passed/Adopted by Substitute on 4/4/2022.

HB 1443:
Reps. Gaines, Wiedower, Gambill, Hagan, Cameron, and others
This bill would require that a mobile food service establishment permit be recognized in all counties while still being subject to local ordinances and the county’s board of health.
House Passed/Adopted by Substitute on 3/15/2022. Senate Passed/Adopted on 3/30/2022.

SB 396:
Sens. Goodman, Jones II, Walker III, Harper, Sims and others
This bill seeks to create the Georgia Farm to Foodbank (F2FB) Program by changing the Georgia Supplemental Nutrition Assistance Program (SNAP). This initiative is a Governor’s priority and included in his budget proposal is $800,000 to fund the program. The funds will be used for grants to provide Georgia Grown products straight from producers to regional foodbanks that will be able to use that food to feed those who need food assistance. The program will be administered by the Georgia Department of Agriculture and they will submit an annual report that contains information on where the food came from and where it went.
Senate Passed/Adopted on 2/11/2022. House Passed/Adopted on 3/23/2022.